You can  also stop for a coffee or a meal at Dig Cafe, our local good food café, have a drink at one of our two pubs – one on each side of the Loddon River, or visit local wineries a few minutes drive north – Welshmans Reef or Chapples Cairn Curran Estate.

About seven kilometres from Newstead on the Newstead Creswick Rd., tucked in the valley, are a Catholic church, some houses, and a red brick (ex) Primitive Methodist church with blue doors guarded by Italian pencil pines. A building where local communities met for decades to dance, talk about local matters, celebrate births, deaths and marriages, and play tennis on the courts behind the building. A place like many others in rural areas of Australia. 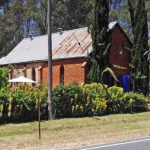 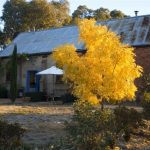 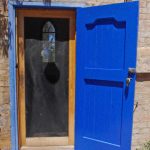 For the past fourteen years it’s been Diana Orinda Burns’ printmaking studio, Studio Paradiso. During these years Diana has run printmaking classes and courses, and consultancies for printmakers from all over Australia. The participants in these activities range from beginners to professionals preparing for exhibitions.
Diana has printed works for John Olsen, Tommy Watson, Mrs Bennett, Adam Cullen, David Larwill, Julian Meagher, Jasper Knight, Rhys Lee, Sam Leach, and James Drinkwater, among others.

Thus the building that’s home to Studio Paradiso stays true to its original purposes: a place where a community of artists and printmakers meet and practise. 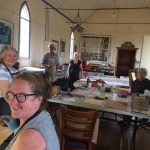 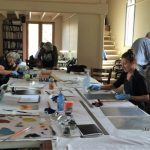 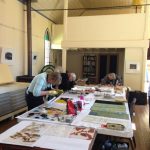 If you’re driving through the Sandon valley to or from Newstead look out for Studio Paradiso. Like many similar buildings in rural areas of Australia it’s associated with many local stories and activities. You might also imagine the artists at work in Studio Paradiso: their conversations and collaborations, including their accounts of problems shared and solved, and their responses to Diana’s guidance and suggestions about directions and possibilities in their work. And, of course, the cakes, cups of tea, eclectic music and roaring winter fires that fuel the artists. One problem yet to be solved is how to get Diana away from her teaching and supervising the presses so that she can enjoy and finish her cup of tea.